So, today's blog is about a particular item that I have recently started to carry on my website!  About 16 years ago I purchased my first polymer framed pistol.  It was a Glock Model 31 chambered in .357 Sig. Now for those of you who don't know much about a .357 Sig I will quickly explain it to you. Basically the .357 Sig round was developed by taking the .40 S&W Round and cutting it down the actual round to the shape size and dimension that currently exists as the .357 Sig.  This gives you a greatly increased muzzle velocity and deeper penetration for this particular round.  So all and all this is a pretty good round for all types of targets.  The best thing about this round is that the muzzle velocity is so good that even at 50 feet this round can penetrate the average engine block and stop the engine from working.  Now back to the whole reason as to why I am writing this blog.  So, about 16 years ago I bought my first Glock Chambered in .357 Sig and really liked shooting it.  The problem was that after a prolonged time at the firing range my hands would start to sweat and I would lose a lot of positive grip on the weapon making it more difficult to hit my targets accurately.   So, what I did was go online and start looking for something that would help me to increase my positive grip on this weapon with either sweaty or wet hands.  What I came across was the Brooks Tactical AGrip. The Brooks Tactical AGrip is a revolutionary material that when applied to polymer framed weapons actually increases your positive grip even when your hands start to perspire or get wet.  These Pistol Grips are made out of a space age material that actually increase your positive grip when your hands are wet or sweaty or even if you have oil on them.  They are also pre-cut wrap around sleeves that are easy to apply and easy to remove if you ever want to and they don't leave any sticky residue behind on the weapon.  Mr. Brooks has really done a fantastic job of inventing a product that not only works but will also leave no traces on your weapon if and when you ever decide you don't like it.  Personally for me that has never happened.  I have not once ever removed any AGrips off of any of my weapons because I like them that much and because they work so well.  I would like to show you an illustration of one so you can see exactly what I am talking about: 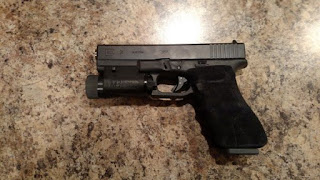 This is my Glock 31 that I put the Brooks Tactical AGrip on so many years ago.  It still looks as great as they day that I put it on and it still works as well as they day I put it on over 16 years ago.  I have shot this weapon more times than I can count with both the .357 Sig Round running through it as well as the S&W .40 round.  This weapon was designed so that you could shoot both types of rounds through it with just the addition of a drop-in barrel.  I didn't have to change springs, magazines or anything else.  Just put a drop-in .40 S&W barrel in the gun and start shooting.  The only draw back is that you lose one round of ammunition per magazine due to the increased size of the .40 S&W round.  All and all this is by far my most favorite weapon to shoot.  I have Brooks Tactical AGrips on all of my Glocks and Love everyone of them.  I also sale them on my website at www.pistolgrisplus.com.  I hope you will come see us and check out our great selection of pistol grips for all of the greatest guns out there.  We offer many styles, colors and materials to choose from. Come spruce up your weapon with us today.  We offer free shipping on all of our Products as well!  I hope you enjoy my post.  Thanks for stopping by to read it.  Sincerely,  Corey Rice
Posted by Corey at 1:48 PM 1 comment:

Pistol Grips for Efficiency in Shooting

When you refer to pistol grips you are referring to the portions of pistols which are held in the hand. These grips allow the pistol to be gripped so that the pistol is held in a forward position that allows the pistols to be also held properly oriented in the vertical axis also.

A pistol grip is also so designed, so that the hand that grips the pistol is also in a position to operate the trigger at the same time. A pistol grip also serves at times as part of the storage for magazines or other tools. It can also be a part of the mechanism that facilitates the charging of the pistol. When the pistol grip is held in the hand between the palm and the fingers, the forefinger is in a position to pull the trigger, whereas the thumb is clear to release the safety catch, without having to move the palm or other fingers.

Pistol grips are made of wood, rubber and other composite materials. The size of a pistol grip will vary depending on the size of the hand, length of the finger and other comfort factors. When a pistol or handgun is aligned with bones of the forearm then the recoil from the pistol is absorbed. The pistol grips in use must allow such alignment to be achieved easily and without any problem. The hand holding the pistol grip needs to be as close to the bore of the pistol so that the recoil felt is less and also allows recovery between shots. Good shooting practice also requires the supporting hand to be held under the trigger, with the fingers parallel to the shooting hand.

Pistol grips are the only part of any handgun that can be customized and made into very personal attachments. Just changing the design and the color of the hand grip allows you to give any pistol a very personal look that is unique. While looks and color can be of importance, any such customization also has to pay very serious attention to the way it can promote the way you are able to handle the weapon and operate it.

Pistol grips must allow a gun to point at any target naturally. It must also allow the person operating the weapon to waste very little time in aligning the sights. Delays here, especially in law and order situations can make a difference between life and death. The pistol grip should allow the gun to remain in the same position after a shot is fired, without requiring any conscious effort on the part of the user. It should be able to use the straight thumbs method of holding the pistol, which is now considered the best way of holding a gun. In this method, the supporting hand below the trigger guard has the thumb pointing to the front. The thumb of the shooting hand, which normal operates the safety mechanism is also rested on this thumb, also aligned to point forward.
Posted by Corey at 2:42 PM No comments: